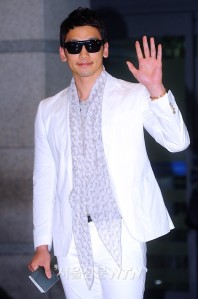 Rain, the undisputed star of the world, returns home.

Rain picked as one of Time’s 2011 top 100 most influential people in the world, returned home via Incheon International Airport on the afternoon of the 28th.

Rain who has twice been included in Time 100 final list, returned to his country today after attending Time’s red carpet event held at the Time Warner Building in New York last 27th.

Rain said about having walked on the Time 100 red carpet held in USA. He appeared through the gate around at 5:50pm on the 28th after flying in on flight KE082 from New York.

With a smile on his face, he waved his hand to many people who were gathered in front of the gate..

A lot of fans both at home and abroad came to greet and say congratulations to him.

Rain stated his feelings about having attended the international event, “I’m truly honored to have twice attended the Time 100 event.” “It was definitely meaningful for me to be with many global stars.”

Following, as the reporters asked him how he felt about raking top on the Time 100 Poll, he answered, “I though I was able to rank top in the poll thanks to my Asian fans. I think Asian stars have been more active on a worldwide scale than ever before, which has had a great influence in helping me to be included in the final list.”

Rain continued to say ‘thank you’ with a big smile and left the incoming area, and then, his fans who had waiting for him shouted for joy when he made eye contact with them and gave them a warm hug.

Rain has been selected as one of TIME’s 2011 top 100 most influential people in the world, and this is the second time since 2006. Aslo, he’s become the first Asian to be included twice in the final list.

The 2011 listed 100 celebrities from all over the world took part in this Time 100 gala party, including the American First Lady Michelle Obama.