It was their final chance to get up close and personal with Rain last night before the singer-actor temporarily hangs up his dancing shoes to serve his country for the next two years.

Though “a little sad” to bid goodbye, a couple of Malaysian fans who specially flew in on Sunday morning for the concert were “proud of Rain” and will continue to “wait two years from now” for his return.

To grab the best possible standing spots in the mosh pit segments, these Malaysian fans started queuing at 9am, hours before the The Best 2011 Rain Asia Tour in Singapore concert began. The first in line was an 18-year-old Malaysian fan who arrived at 6.30am with her mother in tow.

Armed with paper fans and fan paraphernalia, waiting patiently outside the stadium’s premises were a group of 200 overseas and local fans from Rain’s official fanclub. We were told by two Singapore reps that a group of 150 Korean, Japanese and Indonesian fans specially flew in to attend the event last night.

While these 30-something matured ladies adored the 27-year-old Korean artiste for his “style”, “handsome looks”, “dancing skills” and “voice”, the latter’s hot bod aka “chocolate abs” was also clearly the object of their affection.

The concert kicked off promptly at 7.15pm to a sea of lightsticks and piercing screams with large pockets of empty spaces in the terrace seats. Days prior to the concert, it is known that tickets were being sold at a special two-for-one promotional offer due to poor box office sales.

Looking suave and smart in a shirt and leather jacket, Rain danced and grooved to his up-tempo dance music and began to slowly peel off the layers of clothing after his vigorous routines, thrilling fans with his little striptease parade.

“Do you want it? Come and get it,” Rain cooed as he gave an impish grin and defiantly put on a parka jacket over his black singlet, much to the disappointment of his fans who were hoping to see him flash more skin.

With his entourage of 10 dances, Rain floored the stadium with his smooth, sexy dancing skills and pelvic thrusts while caressing his female dancers in a slow dance rock song.

Conferred the title of ‘The World’s Most Influential Person 2011’ by Time Magazine, Rain continued to tease fans again with LIVE behind-the-scenes footages playing on the giant screens when he proceeded to strip and change out of his singlet backstage. When it came to his pants however, Rain wagged his finger in disapproval and redirected the camera away to his table of bling-bling accessories instead.

While concertgoers were promised a spectacular show with a highly-acclaimed two-and-a-half-minute rain sequence made possible by 1,000 litres of water, the highlight of the night was perhaps during the romantic solo serenade of ‘My Girl’.

A lucky Malaysian fan called Lilian was invited to join him on stage after a teary-eyed young toddler in pink rejected the Korean performer’s invitations. Defeated by the young child’s refusal, Rain pointed to her and declared, “I’m waiting for you,” prompting shrill cries of envy from the 5,000-strong crowd.

Working the crowd effortlessly with his charms, Rain got the entire stadium standing on their feet at his cue as they danced “left and right” together to retro vibe tunes such as ‘With You’ after a little cajoling.

Towards the end of the concert, as if refusing to let a minor sound system glitch rain on his parade, the Korean star was all cool as he re-sang ‘It’s Raining’ and thanked fans for their support.

“Thank you for coming. It’s my honour. I’m so happy to be here. I really love Singapore, chili crab, butter crab, I love everything. It’s amazing,” he cried out.

And before the final curtain call, Rain tried his luck again on the same young lass who refused his advances earlier during the concert, and was met with a smile and a wave in return. You got to give him props for putting on a great show and for entertaining fans despite a poor turnout and lackluster ticket sales. 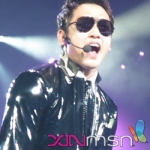