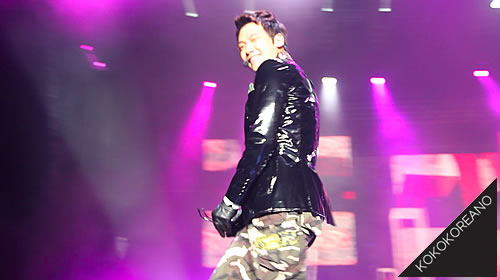 The Best 2011 Rain Asia Tour in Singapore ended with a high note on Sunday, 22 May at the Singapore Indoor Stadium with the Korean superstar, Bi Rain, showing different sides of himself to the fans. Sexy (that 1,000 litres of rain falling on Rain scene in Singapore Indoor Stadium), charismatic, cute (check out that wink!), provocative (Rain and sexy female dances, need I say more?), friendly, professional, and more sides of Rain were seen at the two-hour concert.

Audiences were treated with spectacular laser show, stunning song and dance performance, and many up close personal interactions. Throughout the concert, Rain made exceptional efforts to interact with his fans. He even got off the stage to shake hands with fans seated. The concert was so full of spirit that many audiences who were seated decided to get up their seat and started singing and dancing along with Rain.

Check out Kokokoreano‘s pictures from the concert that night below and subscribe to Kokokoreano’s YouTube Channel for HQ videos of Rain’s awesome vocals and dancing abilities!

The Best 2011 Rain Asia Tour in Singapore is a massive project jointly organized by J Tune Entertainment and CJ E&M from Korea as well as Faith & D Entertainment from Singapore.